Okay friends, we’re coming down to the wire here in the Conservative leadership race. With all of the uproar in the last week with President Trump taking aim at our Canadian dairy industry, we can’t forget that we also have domestic challenges facing our industry. Just this morning, Canadian businessman and Conservative leadership candidate Kevin O’ Leary, one of the polling front-runners in the leadership race, pulled his name from the race and threw his support behind Maxime Bernier. As you know from our previous posts, Maxime Bernier has pledged to end supply management if he is elected leader of the Conservative Party of Canada, and Mr. O’ Leary had admitted that he would use supply management as a bargaining tool in future trade negotiations. Both he and Mr. O’ Leary are leading in the polls, so as you can understand, this bolstering of Bernier’s campaign is rather unsettling.

Supply management keeps Canadian dairy, poultry and egg farms vibrant, viable, and an integral part of our national fabric, from both a social and economic perspective. Without supply management and our border tarriffs, our family farms would have a very hard time competing with the glut of excess milk currently flooding the world dairy market. We know that our system that ensures a fair return for farmers is the envy of dairy farmers around the world, and we personally have received many messages from farmers south of the Canadian – US border who long for a system like ours that would allow their farms to remain viable in this turbulent time for the dairy market.

So the benefits for farmers are obvious, but what about for our consumers? Mr. Bernier alleges that if supply management were scrapped, consumers would pay much less for their dairy; he’s even claimed that Canadian consumers pay twice the amount they should pay for their dairy products. Unfortunately, Mr. Bernier does not have his facts straight. Check out the photos I’ve posted below. 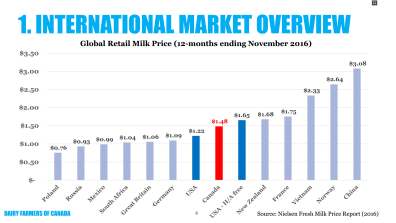 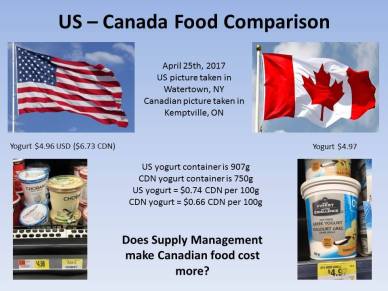 Both research from an accredited research firm and very current anecdotal evidence from a fellow dairy farmer doing her own research prove that Canadians pay a very competitive price for their eggs and dairy. In fact, if we compare apples to apples, Canadian pay LESS for dairy compared to the same dairy products in the US (all Canadian milk is produced without the use of artificial growth hormones). Now, Mr. Bernier, either you’ve been misinformed, or you’re deliberately trying to garner support from unsuspecting Canadians by quoting “alternative facts”.  Judging by the number of times dairy farmers and industry representatives have presented the correct information to you, I’m leaning towards the latter assumption. That doesn’t say much for your integrity, and, in my opinion, throws your entire campaign and character into question. Definitely not the type of individual I want to see at the helm of the Conservative party or – if the Conservatives are re-elected in 2019 – leading our country.

Friends, let’s get the word out! We’re not only facing threats to our family farms from south of the border, we have a very real challenge right here at home too. If you want to enjoy the stable, competitive dairy prices that are the current reality, produced right here in Canada according to the highest safety, quality and animal welfare standards in the world — all the while benefitting family farms and rural economies across our country, speak up! Canadians need to understand that a vote for Bernier is a vote against food sovereignty, against family farms, and against the very fabric of our rural communities. Your help in sharing this message is appreciated.

Let us know what you think! Leave a reply. Cancel reply