Over the past few months, a new video about the dairy industry has been floating around the internet. Titled “Dairy is F*ing Scary”, it purports to show that dairy farming is cruel and inhumane. Erin Janus glibly rattles off dozens of myths about and misrepresentations of the dairy industry, while horrific images flash over the screen. I’ve watched the video numerous times, all the while shaking my head at the blatant lies gleefully rattling off this woman’s tongue. At the request of one of my blog readers, I’d like to try to address the claims Ms. Janus makes. 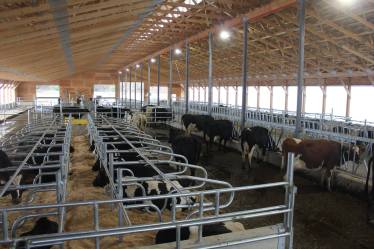 Bright and airy barns, and sparkling clean milking equipment help minimize the chance of our cows getting udder infections.

A healthy udder on a healthy cow. No swelling, hard quarters or redness to indicate mastitis. In the “after” photo, the teats have been coated with an iodine based substance to minimize the chances of bacteria entering the teat canal. 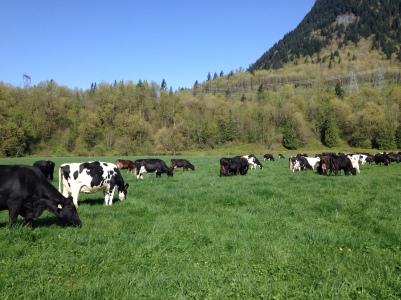 Happy cows on pasture. Most of the cows pictured here are more than 8 years old.

We love our cows and their calves!

For real information about how cows are treated on family farms like ours, I’d like to invite you to take a peek at our Facebook page.

You can find it in the left hand margin of this blog.

I have nothing against those who choose not to include dairy products in their diet. However, I hope that your choice was not based on biased propaganda similar to what is shown in this video. Additionally, I will not stand idly by when my integrity and the integrity of my fellow dairy farmers is attacked. Portraying dairy farmers as abusive and sexually sadistic not only is patently false, but it verges on slander. I’m trying to do my part to slow the spreading of lies about the way cows are treated on dairy farms and the misrepresentation of common dairy practices. I’m not a corporate spokesman or a crazed activist. I’m just a hard-working farmer, and I’m not getting paid a dime to write any of this. I wanted to write this article for the sole purpose of promoting the truth and correcting the false information that I’ve seen all over my social media feeds. I hope that after reading this (rather lengthy – sorry!) article, you’ll now feel assured that dairy farmers go about their daily work with one purpose: caring for their animals with respect and compassion while providing a safe and nutritious product for consumers.

add: this link has a ton of resources comparing milk to other non-dairy beverages: https://milklife.com/milk-vs-non-dairy-milk-alternatives/